The Young Man and the Asrai 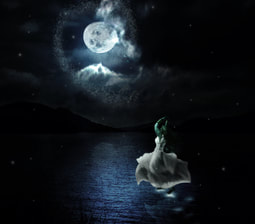 The origin of Blindsighted Wanderer is a little-known tale which entered into English folklore centuries ago. The finer details, like the name (Asrai or Asrey) can vary depending on who is telling it, but the basic story is always the same.

When I was seven years old, I was introduced to the legend, and I was fascinated by how different it was to other 'mermaid' stories. Almost a decade later, I recalled how much it had influenced me, and I began wondering what could have happened if the ending was different. And so, the first draft of Blindsighted Wanderer was born.

Not many people know about the Asrai, but I am still fascinated by the folktale. The following is a version written by me, based closely on the one I read in childhood.

Once upon a time, among the green plains of Cheshire, lay a little fishing village. It was surrounded by many small meres, from where the fishermen took their catches. Just a few miles away stood the Great Lake - largest and richest of them all - but yet nobody dared cast their nets there, or even go close to its shore.

One summer day, a young man questioned his fellows of this strange fact, insisting that there would be much more food to go around if they fished the depths of the Lake. The others, however, shook their heads and told him that anybody who disturbed the Lake would also disturb the Asrai: a race of mysterious water nymphs that dwelled in its depths. The Asrai possessed great power and beauty, with long green hair like water weeds, and would rise to the surface on special nights to dance in the light of the moon. But they would never come up in the day, for they were terrified of all sunlight and warmth. The young man scoffed at this, unwilling to believe that such a creature could exist. The villagers tried to warn him further, but he would have no more, and left.

That same night, the young man took his nets and boat to the Great Lake. The reeds seemed to knot together, as though holding him back, but he pushed the keel into the water regardless. The wind seemed to blow strongly in his face, as though trying to steer him off course, but he paddled on stubbornly. He cast his nets, and happily imagined how pleased all the villagers would be when he returned home with baskets full of fish. When he hauled in his catch, however, he was amazed to find that there were no fish in his net. Instead, there was an Asrai.

The young man stared in wonder. She was just as the villagers had described: fine hair as green as weeds; shimmering skin; webbed hands and feet, with a long fin down her back; and a body no larger than a child's. She gazed at him through the holes in the net, with great pleading eyes - and the young man gazed back, entranced by her beauty. His thoughts instantly changed - no matter about the fish. If he brought the Asrai back to his home, he would become rich and famous.

Blinded by his greed, he set off for the shore, as the sky started to lighten with coming dawn. The Asrai, sensing his intentions, began to panic, begging him to return her to the Lake before sunrise. But the young man paid her no heed, and, in desperation, the Asrai reached for him, clasping his hand. Her touch stung him like a knife, and the young man leapt away in pain. The Asrai recoiled too, apparently also hurt by the contact, and curled up in the bottom of the boat. Frustrated, the young man pulled some nearby reeds out of the water and threw them over her, which seemed to calm her a little. Then he turned a deaf ear to her sobs, and made for the banks.

Before long, he pulled his boat up onto the shore, just as the sun broke the horizon. Light flooded the Great Lake, and he excitedly threw the reeds aside to admire his prize. But the Asrai had disappeared - only a puddle of Lakewater lay where she had been, sparkling in the dawn.

The young man returned to his village in shame, and was shunned by all his neighbours. He never fished again, and became a recluse, haunted by memories of the otherworldly encounter. Where the Asrai had touched him, his flesh had scarred, as though passed through fire, but remained forever as cold as ice. He wore a glove for the rest of his life, to hide the horrid souvenir, and to try to forget all he had seen.

There are some people in Cheshire even today who will say that a calm full-moon night is an Asrai night.

DISCOVER BLINDSIGHTED WANDERER
Did you enjoy The Young Man and the Asrai? Leave a comment below to let me know!