WARNING
CONTAINS SPOILERS FOR TRAGIC SILENCE, THE LIBELLE PAPERS AND SEPIA AND SILVER 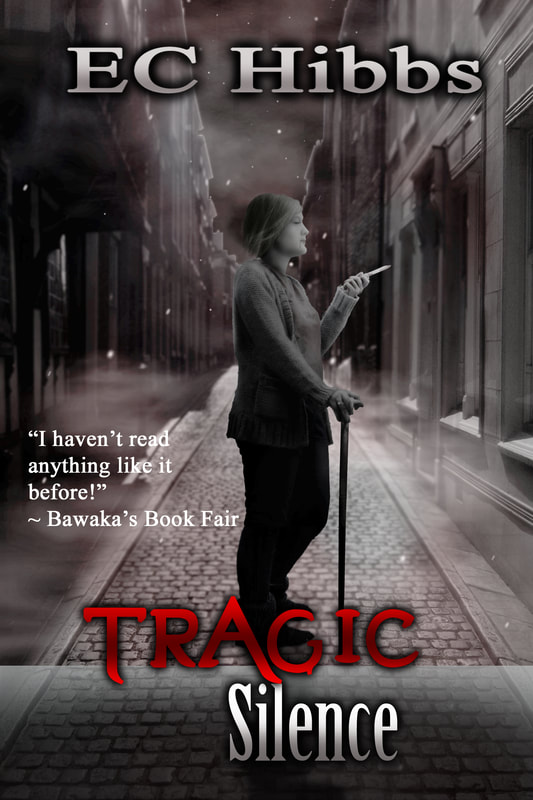 ​The appearance of Bianka's cane is loosely inspired by one which has been in my family since the time period of the Hattyupatak Final Purge (1880s). This same cane is shown on the front cover of the book. The handle being in the shape of a falcon head is a reference to Turul: the legendary entity said to have guided the birth of the Magyars.

Two of the characters in the story - Lucy and Jonathan - are named after characters from Dracula by Bram Stoker: Lucy Westenra and Jonathan Harker, respectively. As in Dracula, Lucy is the vampire's first victim during the main narrative.

Lucy and Emily's surname, Denborough, is shared with Bill and Georgie Denborough from Stephen King's It. Lucy is a homage to Georgie, as her disappearance sets the plot in motion.

Bianka's middle names are the same as the two people who the book is dedicated to: Katie (Katharine) and Natasha. The only difference is that they have been Magyarised - translated from an English form to a Hungarian one.

Bianka refers to the Liderc as "the flying bringer of nightmares." This is a direct reference to the Hungarian word for 'nightmare': Lidercnyomas. It literally translates as 'Liderc pressure', and is said to result from the sense of the demon sitting on one's body as they sleep. This form of the Liderc was rumoured to also drink blood from its sleeping victims, leaving them weakened.

Bianka's 18th birthday - and the date of Lucy's disappearance - is January 15th, 2005. The date of her turning and Lucy's murder is March 8th of the same year.

Frank's words to Bianka, "I'll never let him hurt you. I promise," is a homage to the My Chemical Romance song Vampires Will Never Hurt You.

Tragic Silence makes many references to The Phantom of the Opera, with several scenes and moments of dialogue loosely inspired by the musical. There are also homages to other pieces of classic gothic literature scattered throughout the series; namely The Picture of Dorian Gray by Oscar Wilde, Carmilla by Sheridan Le Fanu, Frankenstein by Mary Shelley and Dracula by Bram Stoker. The Liderc himself is a fusion of Dracula, Dorian Gray and the Phantom.

The Liderc was also inspired by a real nightmare I suffered in my late teens which led to an episode of sleep paralysis.

​Bianka wears tiger's eye earrings. This stone is believed to ward off the evil eye, provide protection, decrease anxiety, and strengthen will.

​The Liderc in Hungarian folklore can appear in several guises, but the one in Tragic Silence is inspired by the type often found in the north of the country, sometimes called "ordog": literally, the devil. It is said to take the form of a long-dead loved one, is impossible to outrun, and sprinkles flames as it flies. It is able to enter homes through keyholes and by coming down chimneys, only being stopped by the burning of incense or birch wood, or by the crowing of a rooster at dawn. All forms of the demon are linked to chickens, and this is referenced in the novel via the demon's birdlike talons.

The final chapter of the novel, when Bianka makes an offering to the Danube, is directly inspired by the song Lucy by Skillet.

Part of my research for Bianka involved tying weights around my ankle to make myself constantly aware of my leg, and walking around my neighbourhood with a cane.

Tragic Silence was originally written as a way for me to come to terms with my own diagnosis of photosensitivity. Many of the symptoms suffered by Bianka, such as the headaches, painful eyes, and itchy blistering rash, are exactly the same as my own conditions.

Sergeant Wilde from the London Metropolitan Police is named after Oscar Wilde.

​Speaking a demonic vampire's name will cause it great pain. The importance of names granting power is seen all over the world and dates as far back as Homer's Odyssey. In folklore, using a true name against its owner has often been used to defeat supernatural creatures.

The Liderc's references to himself as the Angel of Death echo the truth of his past, referencing both Eva's moniker for him and his actions during the Hattyupatak Final Purge.

​The alias surname 'Karnstein' that Hanna, Wilhelm and Frank use while in hiding, is the real name of the vampire Carmilla in J. Sheridan Le Fanu's novella of the same name. In the story, Carmillia is revealed to really be called Countess Mircalla Karnstein.

Frank's statement of "Danke fur das gift", translated as 'thank you for the venom', is a homage to a My Chemical Romance song of the same name.

​Hanna states that vampirism's origin can be traced back to the rabies virus. Alongside photophobia and other forms of light sensitivity, rabies was a major inspiration for the transmission of vampirism in the series. The two conditions share many similarities, such as the incubation period following a bite, and movement along the peripheral nerves, before a heightened stage of symptoms is reached - known in the series as coming of age.

Mina is named after Mina Harker from Bram Stoker's Dracula.

The book concealing Die Gift's safe in Hanna's house is The Phantom of the Opera by Gaston Leroux.

​Although Doppelgangers are not traditionally associated with vampires, the Blutsauger and Aufhocker are both found in German vampire folklore. Their names literally mean 'bloodsucker' and 'to jump upon', respectively. In the case of the Aufhocker, this name relates to their practice of jumping onto a person's back before tearing out their throat.

The Alice Cooper song playing through Frank's headphones in Zurich is Poison.

​David Bernstein's experiments on vampires coincided with the late period of the Scientific Revolution in Europe, when the old superstitions were being transformed by advancements in mathematics, biology, and chemistry. It was not uncommon during this time for dissections and vivisections to be performed on both living and dead subjects, often with no anaesthetic. As Hanna states, the procedures were brutal and unethical, but paved the way for modern science and medicine.

​Donaueschingen, Hanna's hometown, is named as such because it sits close to the source of the Danube. This river features in all three Tragic Silence books.

​The vampire which is stated to have attacked David Bernstein was James Hayes from Sepia and Silver. James was also responsible for slashing the Doktor's cheek, giving him his characteristic scar.

Hanna instills in Frank not just her life's philosophy, but also inspires his choice of vehicle. She flippantly mentions to him in the novel that she would like to own an old Volkswagen Beetle. Several years later in Tragic Silence, this is the car that Frank drives.

​The first papers which would later form Die Gift were written in 1756. This date is also the 4-digit code used to open the safe in Hanna's house.

During the final confrontation, Frank leaps between Hanna and Mina with his wings spread. This is exactly the same way he attempts to protect Bianka from the Liderc in Tragic Silence, ten years later.

Christine Rose and Erik Farkas are named after the two main characters from Gaston Leroux’s The Phantom of the Opera.

Jack Wotton is named after a major character from Oscar Wilde’s The Picture of Dorian Gray. In the book, Lord Henry Wotton is a hedonistic aristocrat who tempts the naïve young Dorian into a life of sin. This is also a nod to Eva’s father, who possesses a face as perfect as Dorian's.

Jonathan’s story of finding refuge with a sisterhood of nuns after his turning is a homage to his namesake: Jonathan Harker from Dracula. In the novel, Harker is nursed back to heath in a convent after escaping Dracula’s castle.

​Eva, Benjamin and James' characters are homages to the relationships between Christine, Raoul and Erik from The Phantom of the Opera. A similar relationship is shown in Tragic Silence, between the characters of Bianka, Frank and the Liderc.

Norman Calvin’s past is based on one of my own ancestors who fought in the Crimean War. Following the conflict, he returned to Liverpool penniless and was forced to enter the workhouse, but within ten years he had built up a successful business, owned a house with servants, and started a family.

Whitby, where Benjamin and Eva spend their honeymoon, is the town where Count Dracula landed in England in Bram Stoker's novel. The ruined abbey where the newlyweds often stroll is where Dracula first fed from Lucy Westenra.

Hattyupatak in English means "Swan Brook." This is a lyric in the song Eva by Nightwish, after which Eva herself is named.

The book which Eva reads halfway through the story is Carmilla by J. Sheridan Le Fanu. Eva also shares a physical trait with the vampire Carmilla: a mole on the side of her neck.

Captain Hallward is named after Basil Hallward: the artist who created the titular portrait of The Picture of Dorian Gray.

​The underground crypt where Eva finds herself towards the end of the novel is the same one where Bianka discovers Lucy in Tragic Silence.

The white lawn dress that Eva wears upon her entry into Liverpool is a nod to Lucy Westenra from Dracula, who is often associated with the material.

​During the later half of the 19th century, Hungary was part of Austria-Hungary under a dual monarchy between the Austrian Empire and the Kingdom of Hungary. Though Hungary today is landlocked, the layout of the shared borders in the 1800s allowed the country a section of coastline, where the Navy was established in Fiume (now Rijeka in modern-day Croatia). Eva sails out of this port on her crossing to England. Budapest is also spelled Buda-Pesth in the novel, as this was what the city was referred to during the Victorian Era.

​The photograph which Eva receives in the mail, of her with her parents as an infant, is the same one Bianka finds in Michael's house in Tragic Silence.

​Eva calling her rescuer "Angel" throughout the book is a reference to the Angel of Music from The Phantom of the Opera.

Margaret’s family in Manchester, the Sewards, are named after Dr John Seward, who treated Lucy Westenra's vampirism alongside Professor Van Helsing in Dracula.

The Calvin family cook, Mrs Dean, is named after Nellie Dean, the servant and primary narrator of Emily Bronte’s Wuthering Heights. Likewise, Eva’s chaperone Mrs Lockwood is named after the character of Lockwood from the same book; and Benjamin’s mother after Cathy Earnshaw.

Bewick's History of British Birds, which Eva thumbs through in her grandfather's house, is also seen in Jane Eyre by Charlotte Bronte. The young Jane reads it whilst hiding from her cruel cousin behind a curtain.

​The novel ends in 1897: the year of Queen Victoria's diamond jubilee, and the same year Dracula was published.

​James mentions that he was turned into a vampire by David Bernstein, Hanna's ancestor in The Libelle Papers. In retaliation, James would turn the Doktor himself ten years later, beginning the Bernstein family legacy. His story of abuse, rejection and coldness  is heavily inspired by themes from Mary Shelley's Frankenstein.

​In the cemetery in Buda-Pesth, Eva notices Erik with his new wife and child, Peter Alexander Farkas. As well as being named after Erik and Zita's father, Alexander Farkas, the baby would eventually become the great-grandfather of Bianka Farkas in Tragic Silence. Ironically, Jonathan tells Eva not to kill the child.

​The links between the Kalvin, Farkas and Jones families mean that as well as being Michael's great-great grandmother, Eva is Bianka's second cousin three times removed.